“Even as a busy chair, you bring real care, hard work, and creativity to your classes. The Corals and Sea Level course that you taught in spring 2019, for example, included a field trip to Barbados to collect data used for student research. Your Oceanography course from last fall is another wonderful example in that you experimented with video instruction, enhanced class notes, and a flipped format in order to achieve better learning outcomes for all students. This deliberate approach to inclusive pedagogy is noteworthy and highly commendable.”

From the citation by Denise Buell

“Rónadh Cox’s influential portfolio includes sedimentary petrology, geochemistry, palaeogeography, planetary geology, gully formation, and coastal erosion. Since 1999, she has been continuously funded by the National Science Foundation. Her early work on sediment petrology continues to be heavily cited. More recent work on coastal megagravel has changed our understanding of the power of storm waves, and has been reported by RTÉ, as well as the Irish Times, Times of London, and Washington Post”

From the nomination by Frederic Dias

“Rónadh Cox, the Edward Brust Professor of Geology and Mineralogy at Williams College, has a history of service to GSA that is extensive and varied. She served as co-science editor of Geology from 2012 to 2015, and during that time (2013–2015) volunteered to represent the journal on the GSA Publications Committee. Following her editor term, she agreed to serve as a Geology Editorial Board member (2016–2018). She also was appointed to the Publications Ethics Advisory Committee (July 2016–June 2019) on the recommendation of the GSA Publications Committee. Incidentally, she did all of this while chair of the Geosciences Department at Williams College.”

From the citation by Jeanette Hamman 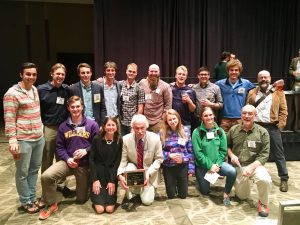 “David Dethier has influenced Quaternary Geology and Geomorphology in so many ways. Not only are his research contributions broad and published in a wide variety of formats and high quality, peer-reviewed journals but his impact on the field is magnified many times over by the generations of students who he has trained and mentored. 7 Those students have trained students of our own – his legacy can be noted across the US in academic departments, in schools, and in geologic consulting companies where Dethier students and the students of Dethier students’ have made their mark.”

From the citation by Paul Bierman ’85 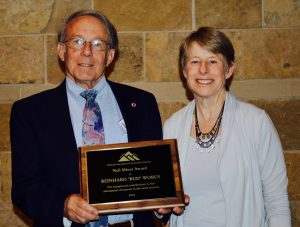 “From his home in the Geoscience Department at Williams College for the last 50 years, Professor Reinhard (Bud) Wobus has reached far and wide to spread his enthusiasm for geology. An outstanding teacher, mentor, and research supervisor, Bud has helped hundreds of Williams students explore geology in innovative introductory courses and through the geology major. He has introduced countless others to geology through 35 years of work with the Colorado Outdoor Science Center, though numerous field excursions for Williams alumni, and as a field trip leader for local groups in the Berkshires. By creating enduring structures like the Keck Consortium and through his direct work with students, alumni and citizens, Bud has ‘stimulated interest in Geology’ and increased the capacity of others to do the same.”

From the citation by Cathy Manduca ’80

From the citation by Denise Buell

“The Subaru Outstanding Woman in Science Award was presented to Phoebe A. Cohen, of the Massachusetts Institute of Technology, for her 2010 Ph.D. research, “Investigations of enigmatic Neoproterozoic eukaryotes,” which is a significant contribution to the fields of paleobiology and geobiology. “In respect to research excellence and accomplishment,” writes nominator Roger E. Summons of the Massachusetts Institute of Technology, Cohen’s work is “characterized by broad geological and paleobiological understanding, fastidious attention to detail in experiment and observation, and an atypical degree of clarity in how her findings are communicated.” Supporting nominator Andrew H. Knoll of Harvard University writes that Cohen’s “broad and deep knowledge will serve her well in a new generation of teaching about our planet’s history.”

-from the GSA press release on “2012 Medals and Awards”

“Fellowship is an honor that is bestowed on the best of our profession once per year at the GSA Spring Council meeting and is recognized at our yearly Annual Meeting. GSA members are elected to Fellowship in recognition of distinguished contributions to the geosciences.”

-from the GSA Fellowship page

Covid-19 is an ongoing concern in our region, including on campus. Safety measures are in place, and campus community members and guests are additionally advised to take personal precautions. See the college's Covid-19 website for information about campus policies. For the latest research and recommendations from the CDC, visit cdc.gov/coronavirus.